In the Spanish language there are different types of verbs that can be classified in different ways. There are regular and irregular verbs, copulative, impersonal and personal, transitive and intransitive, reflexive and others. Even a type of verb can correspond to more than one category.

The term “verb” comes from the Latin word “verbum”, which means “word”. A verb is a word that expresses an action, movement, existence, state or condition. The verb occupies an important place in sentences and is conjugated taking into account its type, number, mood and tense. Verbs can appear conjugated in person, number, tense, mood, and aspect, but they can also appear in non-personal forms.

Classification of verbs in Spanish

Verbs in Spanish can be classified into the following types: 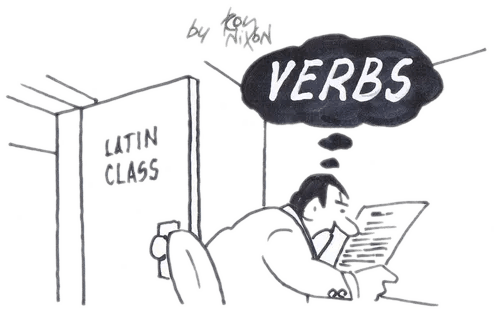 Infinitive verbs are the basic form in which verbs are found, that is, without conjugation. By themselves they do not indicate either the subject or the moment in which an action is being performed. In Spanish, verbs in the infinitive are equivalent to verbs preceded by the particle "to" in English.

This category is mainly based on the way of conjugating verbs, which in this regard can be divided into:

Most of the verbs in Spanish are regular and can be conjugated according to the models of verbs ending in -ar, -er and -ir. The verbs "amar (to love)", "temer (to fear)" and "partir (to leave)" are generally used as examples. In regular verbs, the root of the verb is maintained and the ending or ending is modified according to the mood, tense and number. Other examples of regular verbs are abrazar (to hug), existir (exist), desarrollar (develop), repartir (distribute), comer (eat), usar (use).

These verbs do not follow a pre-established pattern for their conjugation, but their root and ending can change indistinctly depending on their mood, tense and number. Some common examples of irregular verbs are ir (to go), tener (to have), haber (to have), estar (to be), dar (to give).

One of the most important categories of verbs in Spanish grammar are transitive and intransitive verbs. In fact, in most Spanish dictionaries transitive verbs are distinguished with the abbreviation "tr" and intransitives with "intr". This differentiation is based on its syntax within the sentence and on the complements that the verb needs or does not need to have a complete meaning.

Depending on the context, some verbs can be both transitive and intransitive. For example, the verb to sleep is intransitive in this example: "Yo duermo (I sleep)." However, it is transitive if someone is put to sleep: "Durmió a su Bebé (She put her baby to sleep)."

Reflexive and reciprocal verbs are accompanied by reflexive pronouns: me, te, se, nos and os. The action falls on the same subject who performs it.

In these verbs, the object is the same person or thing that performs the action. Some examples of reflexive verbs are: levantarse (get up), peinarse (comb your hair), lavarse (wash), cepillarse (brush), dormirse (fall asleep), ponerse (put on), etc.

They are verbs that do not refer to actions, but are used to express states, conditions and characteristics. They are usually accompanied by nouns, adjectives or other types of constructions. For example: ser (to be), estar (to be), parecer (to seem).

This classification distinguishes verbs that do or do not need a subject to have a complete meaning:

They are verbs that can be conjugated in all the persons of Spanish language : primera (first) [yo (me), nosotras / nosotros (us)], segunda (second) [tú (you), usted (you), ustedes (you)] or tercera (third) [él (he), ella (she), ellos (they), ellas (they)], both singular and plural. These verbs function as the nucleus of the predicate of a sentence and, therefore, always agree in person and number with the subject. For example: caminamos (we walk), había funcionado (it had worked), estudias (you study).

These are verbs that cannot be conjugated in all persons and are only conjugated in the third person singular. These verbs do not agree in person and number with the subject, because they are in sentences in which there is no subject that performs an action. Most of these verbs designate meteorological phenomena. For example: llueve (it rains), nieva (it snows), graniza (it hails).

These are used alongside another verb to give it a full meaning. They are generally used to form compound tenses and the passive voice. The most common is "haber (to have)", for example: "He comido (I have eaten)". Other auxiliary verbs are “ser and estar”.

Other forms of verbs

In Spanish, verbs can also take other forms depending on the moods or verb tenses.

These moods indicate the subject's perception of the action of a given verb. Indicative verbs are used for real or certain events. Instead, subjunctive verbs refer to actions where the subject wishes, hesitates, or has an emotional reaction. Imperative verbs indicate orders or mandates.

Participles are used to form perfect or compound tenses. Most end in -ado or -ido, but some are irregular. Sometimes participles can also be used as adjectives. For example, the participle “quemado (burned)”: "He quemado la tostada (I have burned the toast)" and "Me gusta el pantalón ajustado (I like tight pants)".

Gerunds end in -ando or -endo and are the equivalent of English verbs that end in “-ing”. They are used to express actions that are or were happening at a certain moment: “Estoy viendo un programa (I am watching a program)”, “Estaba caminando (I was walking)”. They can also function as adverbs, such as "Trabajé tomando notas (I worked taking notes)".