The Letter Ñ in Spanish Language

The letter Ñ is technically the contribution of Spain to the Latin alphabet. The sound of this letter did not exist in Latin, but the evolution of the language and the emergence of Latin consonant groups such as GN, NN and NI gave rise to the letter Ñ.

The letter Ñ is pronounced with a nasal palatal sound together with a vowel. In Spanish, the name of this letter sounds like "enie". As explained by the International Phonetic Alphabet (IPA), the letter Ñ is formed in such a way that the air partially escapes through the nose and is articulated with the middle or back part of the tongue and the palate; ok, this sounds complicated, but it's not that difficult. 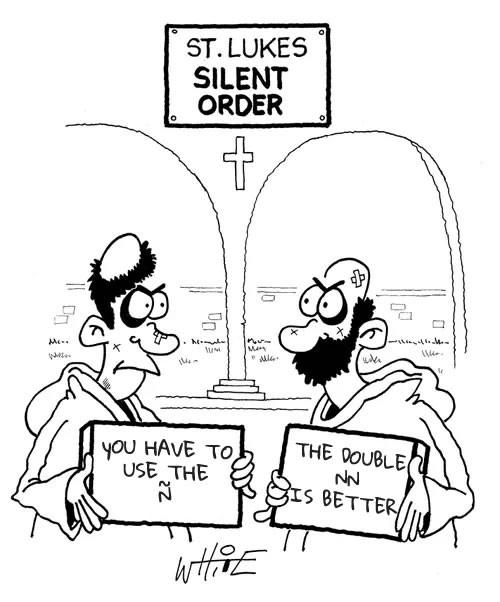 The origin of the letter "ñ" dates back to the Middle Ages, during that time in the monasteries and some time later at the time of the invention of the printing press, they sought to save letters to save effort in the tasks of copying and placing characters. Originally, the sound of the letter “ñ” was symbolized by the sequence of the letters “nn” (double “n”), which represented a high cost in the production of texts (in Portuguese, for example, the combination of the letters “nh” is equivalent to the letter “ñ”).

So, one day around that time, someone had the "wonderful" idea of suggesting that the “nn” be reduced to a single letter, and that was the letter “ñ”; that is to say, the letter “n” combined with an italic line above it, quiet discreet but still significant, called “tilde”, which would be placed above the “n”, thus giving rise to the letter “ñ”, this letter is a symbol of the Spanish or Castilian language. A similar phenomenon began to occur with the Portuguese language and applied to different letters in the Portuguese alphabet , where for example, "an" would become written "ã" (with a “tilde” on top), so the the word “manzana (in Spanish)” is in Portuguese "maçã" (apple).

It is important to emphasize that the letter "ñ" is also present in other international alphabets (Asturian, Aymara, Breton, Bubi, Galician, Basque, Extremadura, Chamorro, Mapuche, Mapudungun, Filipino, Quechua, Guaraní, Otomí, Mixteco, Kiliwa, Tagalog). , Crimean Tatar, Tetun, Wolof and Zapotec). It also appears in other Nilo-Saharan languages, Zarma, and Australian Aboriginal languages, so it is not exclusive to the Latin alphabet.

The use of the tilde above some letters is a resource that continues to be applied in modern times. In Brazil, for example, it is very common today to represent the negation word “não” [no], with the letter “ñ”, this is a historical phenomenon of modern times, the result of the expansion of the Spanish language in this country. , and thanks in large part to the influence of the Internet and globalization. Today the letter "ñ" is not found in electronic communication systems, the "ñ" is generally replaced by the "n", something that is very natural since the vast majority of keyboards do not include this letter. But perhaps one day the letter "ñ" will become part of the alphabet of other languages.