In the sacred book or the bible of the K'iche Mayans, the name of Ixquic is well known, this goddess is also known as Xkik 'or Mayan mother goddess of the Underworld Xibalba, she is the one who gave birth as a virgin to two twin gods called Hunahpú and Ixbalanqué. The beliefs of the Mayans about death consisted that, when they died, they only left the earthly level to go to another, and one of these levels is the Mayan underworld called "Xibalbá"

The underworld Xibalba is a type of "hell" it was guarded by several lords and among them was the powerful Cuchumaquic, a being that caused bloodshed to humans. He had a daughter named Ixquic, the princess of the underworld. Princess Ixquic upon hearing the story about Hun-Hunahpú who was beheaded when visiting the underworld for a challenge that Cuchumaquic himself made long ago, then his remains were transformed into a gourd tree. She clandestinely visited the famous tree and would eventually cause her to flee the underworld.

Ixquic is a character belonging to Mayan mythology, she is the virgin mother goddess, and it is with her that the Third Cycle of the Popol Vuh begins. This cycle of the Mayan bible refers to a cultural reformation, giving predominance and relevance to the female gender. For this reason, the goddess forms one of the essential bases of it, she is one of many female goddesses but Ixquic is very important in particular for the Mayans, in addition to her 2 twin children (heroes of the Mayan culture) .

Ixquic from a young age was enchanted by the stories told about a particular tree that was born out of nowhere and despite many warnings about what could happen to whoever went there, the princess felt a great attraction to this place. For this reason, without anyone knowing, the princess set out in search of the famous tree.

Finally, after finding the mysterious site, she finds the tree that she was looking for and among the fruits of this tree was hidden a skull, belonging to the god Hun-Hunhpú, the supreme teacher of magicians. It sprouted into the light after Ixquic spent a while appreciating the tree. The skull asked if she wanted some fruits from the tree, Ixquic answered affirmatively to the question of the skull and the god asked him to extend her hand.

Princess Ixquic became pregnant by a Hunahpu spell, the evil lords of Xibalbá decided to sentence her to death under the charge of disgrace, not only for disobeying orders to leave the palace, but also for becoming pregnant, since the virginity of women It was owned by men, women could not decide on its purity. Her punishment was to be the removal of her heart. Being in danger, she made the decision to escape from the underworld and seek help from the mother of the Magician God Hun-Hunahpú, Ixmukané, goddess of corn. However, she Ixquic is captured on the way and begged the hunting owls for mercy to let her go. They agreed to the princess's request, but they asked her to leave proof that she had been captured and killed; so the princess cut a fruit from the red garnet tree (pomegranate) and removed its pulp so that it resembled a heart, she placed it in a gourd and gave it to the owls to show as proof of her death. 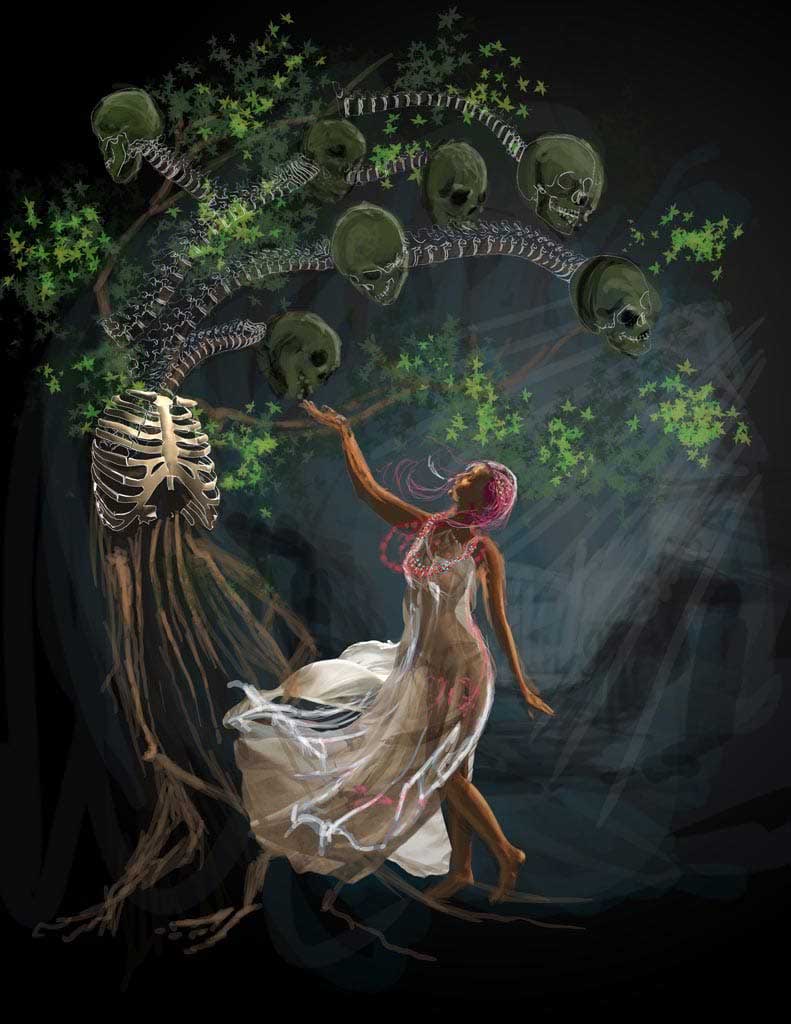 The nocturnal birds helped her to reach the terrestrial level and then deliver the supposed "heart" to the evil deities to then burn it.

She lived with her mother-in-law and gave birth to twins Ixbalanqué and Hunahpú And that is how the story of the twin sons of Ixquic and the Magician God Hunahpu begins.

The importance of this Mayan Goddess in history