Yum Kaax, is a name in the Mayan language to represent the god or deity of wild vegetation and as well as the guardian of its animals. He is known by other names such as Ah Mun, Yum K’aaz or Yum Uil according to other Mayan languages. This Mayan God is continually confused with the Corn God (God Eh).

According to some Mayan writings that were in the Yucatan peninsula, the God Yum Kaax is considered as the son of Itzamná, an all-powerful god and of Ixchel, the goddess of love and fertility, in addition he was also named as a guardian of Jungle.

This god can use his power to extend that protection to the cornfields (one of the most important sources of Mayan agricultural production) and other fields of vegetable crops against the attacks of the wild nature represented or created by this same god. For this reason, the Mayan farmers invoked him and offered him the first fruits or vegetables from their fields in order to ask him for protection of their crops. He is also considered the owner of the forest animals, which is why he was invoked by hunters. This god can manifest himself to hunters who ask him for help through songs to ensure a successful hunt and that the arrows magically return to the archer. 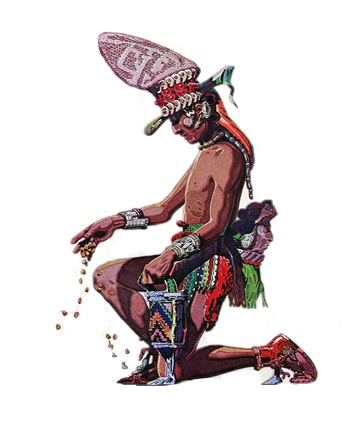 This god is considered to be benevolent, it also symbolizes the abundance of life and prosperity, and despite this, he is surrounded by enemies according to Mayan history. When he is represented physically, he is usually personified as a young man who wears a kind of hat in the shape of corn on his head and sometimes with two colors, that is, yellow and blue.

He is also called as the lord of the forests and is sometimes presented taking in his hands a vessel in which he carries three ears of corn. The Mayan scriptures describe him as a very handsome god since in addition to having long hair, he also had a beautiful face.

The Mayans had a belief that this god personified life because men and women had been created thanks to the corn dough. However, the power of this deity was subject to the power of the Mayan gods of wind, drought, hunger and death. Since he was a young god, he needed help from experienced deities, one of them was Chaac, the god of rain. One of his greatest allies in obtaining help from Chaac was man, since with the rites that they performed, they managed to allow the rain to fall on the cultivated fields, in addition to freeing them from weeds and driving away pests.

Confused with God E (or God Eh), which is the God of Corn

In the past, this god was mistaken for being described as an agricultural deity, meaning that he was known as the god of corn, but in reality the God of Mayan Corn is God E, according to the Mayan codices. This concept is totally false. According to the ethnography of this culture, Yum Kaax is really the god of wild plants and the most important animals for hunters.

Yum Kaax is really very important for the Mayan culture, since it is the main source of food for the Mayans, therefore it is the object of rituals that aim to keep it at ease so that people can receive its benefits and aid in case they ever need it.

According to the latest stories of mythology, he was also confused as a more general agricultural deity, also called then as "The Lord of the Forests" and even some of his functions were assumed by the god Chaac. But one way or another, thanks to his father and Chaac's help, Yum Kaax was a benevolent deity, a god of life.

This deity is one of the most important for all the Mayans, for farmers as well as hunters in general, since thanks to him, farmers could have excellent crops and hunters to have a good hunting day. This god, as a benevolent deity, never refused to help all those who needed it.