The Mayolica Ceramic is an important part Guatemalan culture today, an important heritage of the Spanish colony of centuries ago.

The original name for this ceramic technique (the first potters came from Spain in 16th century) brought the Spanish Colony was ‘MAIOLICA’ and/or ‘MALICA’. The name ‘Maiolica’ refers to the Mallorca island in Spanish, which was one of the most important export and trade spots in Spain for ceramics many centuries ago. The name ‘Malica refers to Málaga in Spain, where the first ceramic workshops were established.

The Mayolica Ceramic in Guatemala is still produced using very old traditional techniques from the old times. The shape of many pieces starts using a manual lathe, which means that Guatemalan potters use their hands to give form the each piece.

The figure of this lion figure comes from La Merced Church in Antigua Guatemala, and it was part of the remodeling process for the church in the 18th century. This figure, as well as many others still present at the church today are a great example of the Mayolica ceramic production in Antigua Guatemala during those days.

Another trend or style for this art is shown in this ceramic plate. The decoration design is geometric around the borders, using circles with green and yellow colors. The design used in the center may include flowers or leaf representations, but the most popular ones included zoomorphic motifs, standing out the stylized representations of the animals that were part of the ladino cosmological structure, such as jaguars and deers. These two species were no longer part of the fauna around Santiago City (La Antigua Guatemala), but the concept within the potters' cosmology towards the representation on the plates predominates. 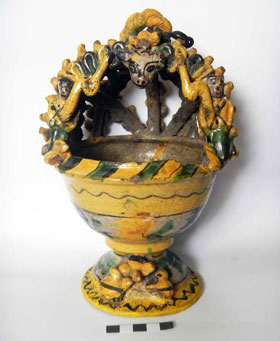 The censers (incense burners) were also an important part of the products made with this technique. They are distinguished by the upper decoration in high relief with representations of bulls, birds, rabbits, dogs and other animals.

Nowadays, there are still few potters who use the traditional technique of production in Antigua Guatemala.

There are potters who use modern methods that try to imitate the traditional style, but the result is not the same.