Guatemala is internationally recognized for the art of its traditional fabrics, made with great richness in color and detail, using quality materials. Despite the influences of globalization, the indigenous people of Guatemala continue to use ancient techniques to produce their textiles and traditional costumes.

This is the second post on Guatemalan Traditional Costumes

We suggest you to visiting the FIRST POST ON GUATEMALAN COSTUMES HERE if you havent done so.

The wide variety of designs and colors that we see in the indigenous textiles of Guatemala demonstrates the cultural richness of the country. Guatemala is a small country, but it is large in its Mayan cultural diversity with traditions that are inherited from generation to generation.

The history of each region, as well as the beliefs of the population are the elements of inspiration for the designs of their costumes, using geometric, anthropomorphic, floral, and zoomorphic figures, all hand sewn; their fabrics are produced using waist or pedal looms made of wood by themselves. The variety and creativity is such that it is even difficult to find a typical suit like the other.

The tradition of handmade textiles and costumes are difficult to find in many parts of the world, however, Guatemala is one of the few countries that continues the tradition in a natural way, thanks to a cultural pride despite the influences of globalization and trade.

The creation of this beautiful art we see in the indigenous fabrics of Guatemala takes a lot of time and effort, the artisans producing these fabrics by hand are not the ones who earn the most from the local and tourism trade. Unfortunately, we live in a culture in which we are used to asking for lower prices no matter what, thus reducing the value of this craft work. Take a “huipil” for instance, this is the costume piece for the indigenous women in Guatemala, it takes 8 hours a day for 3 months to produce, and the final sale price is US$55 (US dollars), this is US$0.60 cents per day of work. Still, the art and traditions of the indigenous population of Guatemala continues. Today, textiles and indigenous costumes are an essential part of Guatemala’s culture, generating tourism and it is one of the most important assets in the traditional markets.

The indigenous costumes of Guatemala are made up of the following elements. 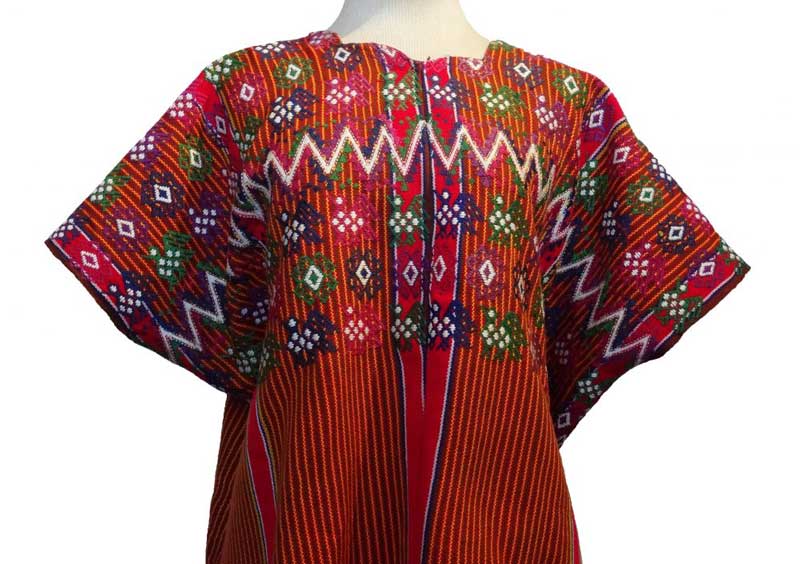 The traditional indigenous blouse is called Huipil or Güipil. These blouses are usually made with using high quality threads, each one is handmade by women who spend hours working every day sitting on the floor using a waist loom to produce them. Some of these Huipiles are so detailed that it could take up to 6 months to produce.

Each one is unique, the decorative elements of its design has a religious meaning influenced by its culture and history. For example, the diamond figure means the path of the sun and the four cardinal points. An important detail to note, some "huipiles" have embroidered a nahual, almost hidden between the embroideries of the blouse. This is because according to the K'iche Maya culture, each person has a nahual that protects and watches over them during life, so including this figure in the design of the blouse is an important protection symbol. 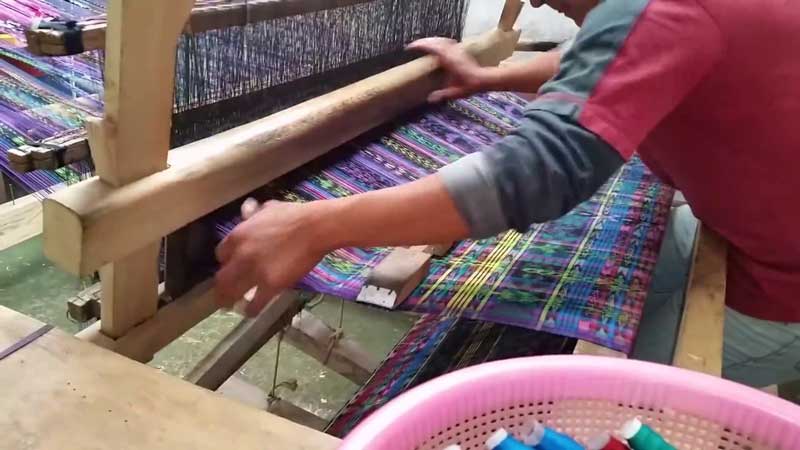 Skirts or "Corte Tipico" (as known in Guatemala) are usually woven in pedal looms and are manufactured by men. Pedal looms are very large and require a lot of physical strength to work with. The fabrics used for skirts is much wider and thinner compared to the ones needed to make a Huipil. The skirt is formed with a long piece of fabric that is wrapped around the waist, then a girdle or belt is used to hold it in place.

The designs of these fabrics vary according to the region and culture. These designs are created by using different threads colors in the production, or dyed by ancestral techniques to form patterns. These techniques are called IKAT.  Some of these skirts also include a few embroidered designs. Depending on the region of the country, some skirts reach the knees, and others reach the ankles. 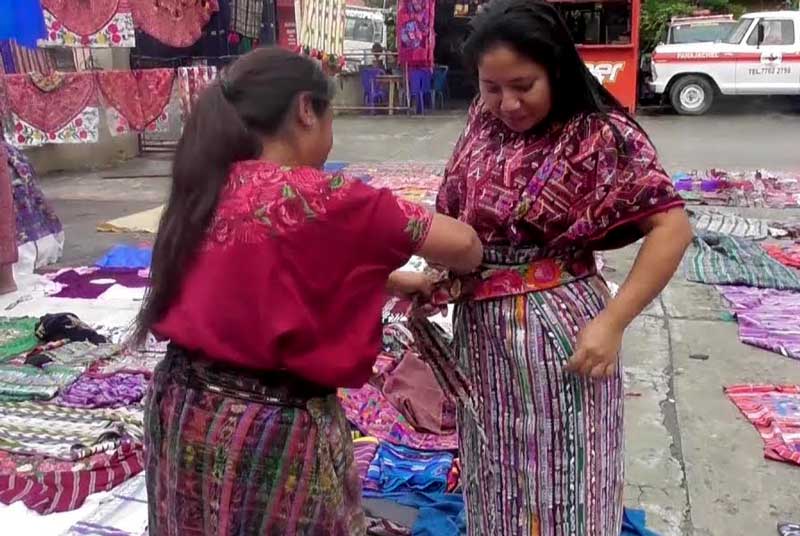 To hold the skirts properly in place, indigenous women wear girdles or belts. These straps are very long pieces of cloth, as long as 3 meters. Depending on the region, these straps are wide and include hand-embroidered decorations with very intricate details, but there are also some others with very simple with just a few design details on them.

Although in some regions women decorate and weave their own belts, in most cases men in charge to produce these pieces, for each one is very long and requires a pedal loom to make them. 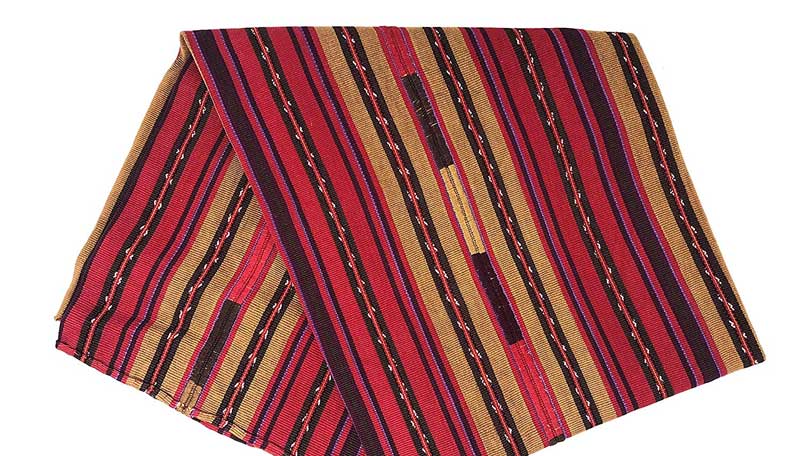 This is a very important piece for the costume of the indigenous women in Guatemala. It is a multi-purpose piece of cloth. The size of this fabric varies greatly, it depends on each person and how they use it. The Tzute is used to hold and carry their babies on their backs, to cover the food baskets they carry on top of their heads and they also use it to cover themselves when they enter church.

These pieces of cloth are produced on pedal looms. The Tzute is formed by a single piece of cloth, or sometimes two big pieces are sewn together using "randas" (technique used by the indigenous culture to join their fabrics). Sometimes these "randas" are decorative (hand-embroidered flower designs) , but some others are very simple and functional.

Men also use Tzutes, however, these have a religious and formal purpose. The difference between a Tzute for women and one for men is basically very small and hard to see, the difference lies on the small tassels or ribbons tied at the corners of the fabric, for these are exclusively for men. 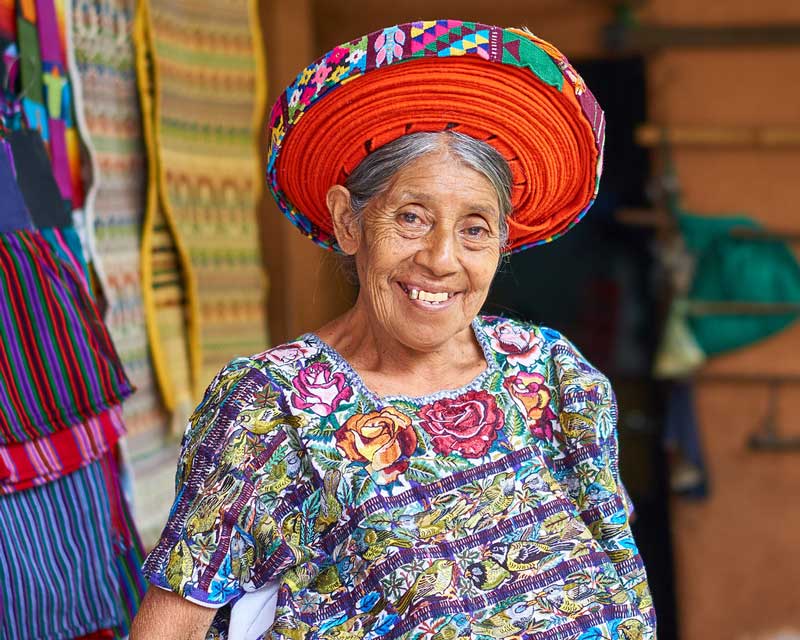 The headband or “cinta” (as known in Guatemala) is an accessory of the indigenous female costume, it distinctly shows from which region of the country it comes from. This “cinta” is made with embroidery and intricate designs, these designs tell a story that represents their culture. The way in which this headband is placed and wear has an important meaning for them, for it tells if she is single, if she is married, or if she is the matriarch of the family. 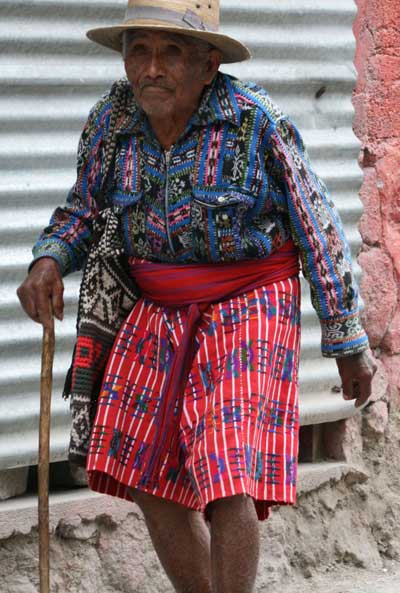 As we have mentioned in the previous article, men have almost lost the tradition of wearing their typical costume. However, men can still be seen in some regions of Guatemala to wear their traditional costumes, it is especially visible in some villages around Lake Atitlan.

Men's pants are hand-woven by women, with embroideries that are similar to huipiles, although the design varies depending on the region, they are usually simple and not as detailed as women’s costumes. There are two styles, some of the pants are short, just below the knee, this style of pants are generally quite colorful, with birds and flowers embroidery. And the second style is longer, simple and not as colorful as the short ones.

The kneepad or “rodillera” (as known in Guatemala) for the traditional pants is a piece of wool fabric placed on the trousers’ knee. This is seen in only a few regions in Guatemala, especially in the Sololá area. The kneepad originally emerged to protect men's knees while working on the field.

Some knee-pads are used as an "accessory" for the pants, this means that it is not sewn into the pants fabric, it is rather a piece of wool fabric that wraps around the knee and calf. In these cases, the fabric is thick and suitable for heavy work. The wool texture is rough and unrefined, this makes it more resistant. Some of these knee-pads have some designs on them that represent a village or region.