El Mirador is undoubtedly one of the largest and most important Mayan cities, not to mention that it is also one of the oldest archeological sites in the world. It is located in the middle of a thick and almost unexplored jungle, in the municipality of San Andrés, Peten. The buildings and structures of this ancient Mayan city are part of the "Late Preclassic" period of Mayan history. Name The Mirador (The Viewer) was given by the way it was first discovered in 1926.

The Mirador is located in the territory of the Mayan Biosphere, and dates from 600 B.C. or even before that.  The access to this archeological site is very difficult, since it takes 2 days walking or by helicopter from the Carmelita village. The Mirador was first seen remotely by workers from the gum industry in the woods of Peten, who saw the peaks of the buildings of the city from the distance when they climbed trees in the middle of the jungle in 1926, chewing gum companies subsequently confirmed the discovery.

Some photographs were published in 1930 that confirmed the discovery, so in 1960, the well-known British explorer Ian Graham made the first excavations to publicize the existence of the first Mirador pyramid called La Danta. Subsequently, a series of investigations carried out around the 80s helped confirm the antiquity of the Mayan city. These investigations were eventually halted due to lack of funds.

In 2003, archaeologists Richard Hansen and Edgar Suyuc resumed investigations and began large-scale excavations. These studies helped reveal that the La Danta pyramid is actually the largest pyramid built by the Mayan civilization, and this pyramid is part of the largest city discovered so far. 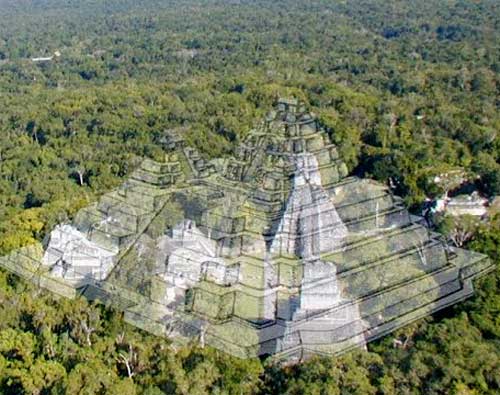 The discovery of this new Mayan city and its antiquity, bring back to debate the reasons for the collapse of this civilization and of this city in particular, whose history took nearly a thousand years. Extraordinarily straight roads covering kilometers, star-watching buildings and other finds that suggest an advanced civilization have been discovered. Today, despite the great efforts to discover more of this fantastic city, much remains to be discovered. The dense jungle forces intense but slow work to restore the ruins in El Mirador, this is one of the largest archaeological projects in the Americas and it will take years. Just to get an idea of the scale of the restoration work, the El Tigre Temple is a building over 55 meters high, its base is as large as 3 soccer fields together. The La Danta building, confirmed as the tallest ancient structure in the world, it is 70 meters high.

There are tours to visit the place, however it is still difficult to explore this archeological site since it is far away. It is possible to arrive by helicopter in a short time from the nearby villages, but a visit on horseback takes about 8 hours, and on foot it would take two days to arrive.

If you are a lover of history and archeology, this is the place to visit, you will be amazed.