The Portal del Comercio, also known by the citizens of Antigua Guatemala as the "Portal of Las Panaderas", is located in the center of the colonial city, opposite the central park and opposite the Cathedral of Antigua Guatemala. This portal houses many important businesses, among these are restaurants, coffee shops, banks, book sales, and traditional Guatemalan souvenir shops.

Time, the architectural, historical and cultural evolution create monuments, as well as give identity to the city. And this is the case of the Portal Del Comercio monument in Antigua Guatemala, an architecture of the sixteenth century created to boost the economy for the city since the times of the Spanish colony (The exact date of its construction is unknown). At that time, it was necessary to create a center of commerce in a city that was starting, and there was no better place than in the center of Antigua Guatemala, in front of the Central Park.

Soon, Antigueñan citizens could see women with baskets full of bread along the portal, sitting in chairs selling bread to the crowd of people who walked at all hours at the Portal, because of this, the Portal Del Comercio acquired the popular name of "Portal de las Panaderas" (Bakers’ Portal), a name that has survived to this day. It is known that the vendors of Pan spent the night there, waiting for the activity at dawn hours to start selling bread. Since they had their stalls on the edge of the corridor, on the edge of the street, each space was highly valued, if a saleswoman got up and left her place, someone else would take it as her own, so they needed to take care of their stalls day and night. It was hard-work for them.

The "Portal de las Panaderas" still retains the original architectural features of the Spanish era, with a Spanish-style terrace, classic wooden columns and the floor was made of solid stone, just like the base for each column.

The commercial and tourist activity of the Portal continues until today. Although of course, we can no longer see the Panaderas sales stands along the portal, they are still one of the most popular streets and frequented by locals and tourists on a daily basis. The Café La Condesa is perhaps the most popular in Antigua Guatemala, and is located right in the center of the Portal.

Right on this street, towards the north is the very famous ARCO DE SANTA CATALINA. The Portal del Comercio or Portal of Las Panaderas is the perfect spot in Antigua Guatemala to start your journey through the history of this colonial city, Antigua Guatemala. 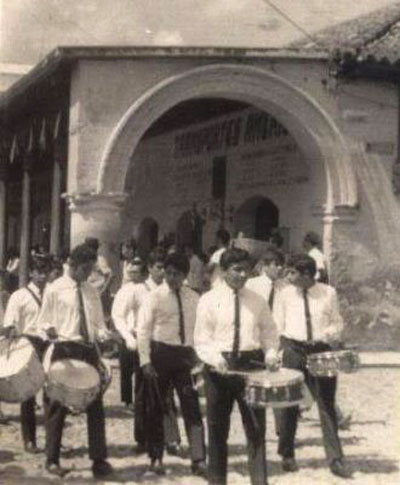